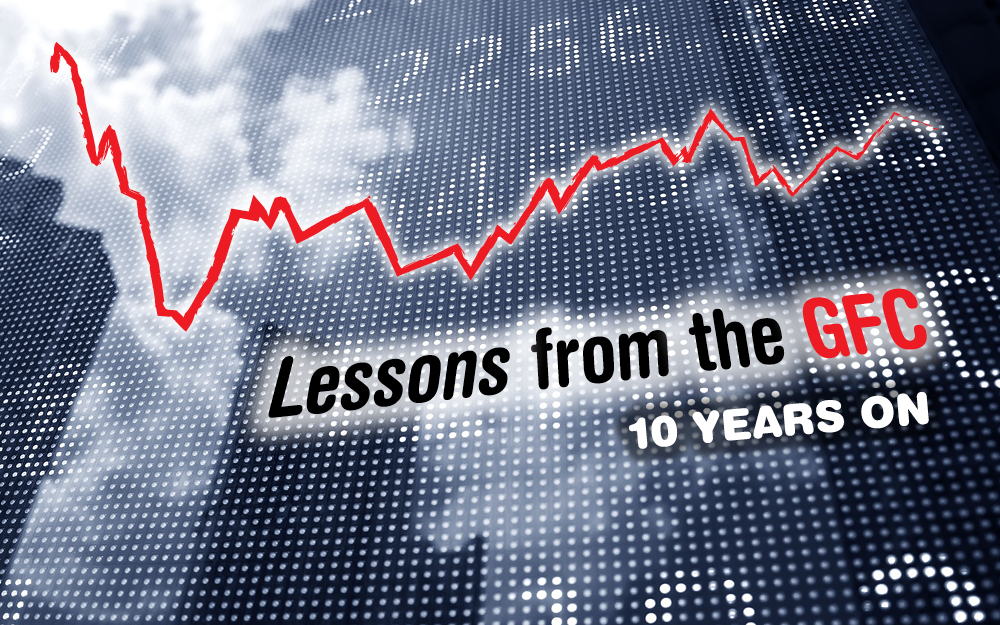 It’s been a decade since the market crash known as the Global Financial Crisis rocked the investment world. At the time investors could only watch in disbelief as 50 per cent was wiped off the value of their shares. Arguably, the actions those investors took are still reverberating today. Which begs the question: what are the key lessons of the GFC and did we pay attention?

Predictably, there were warning signs before the eventual market crash. Just as predictably, no-one could predict the exact timing or the magnitude of the crash.

Ground zero of the GFC was in middle America. A lengthy period of low interest rates and poor home lending practices left homeowners vulnerable when rates began to rise and house prices fell below the amount they owed the banks. When whole neighbourhoods walked away from their homes and their debts, the liability shifted to the banks.

Compounding the housing bust was the proliferation of new financial products that packaged up sub-prime loans along with higher quality debt and sold them on to global investors. These derivative products with names like collateralised debt obligations (CDOs) were sold as cutting edge but few investors understood the risks.

When in 2007 investors tried to dump their CDOs the investment banks that issued them were unable to finance redemptions. The crisis led to a credit crunch and the eventual collapse of major investment firms like Bear Stearns and Lehmann Bros.

The shock impacted markets around the globe. The Australian sharemarket followed Wall Street, falling around 50 per cent from its peak in November 2007 until it hit rock bottom in March 2009.

What lessons did we learn?

Ten years is a long time on global markets. The US sharemarket is experiencing its second-longest bull run in history – eight years and still going strong. Australian shares have also had eight good years, although prices are still below the 2007 peak. All of which makes this a good time to ask if investors still remember the lessons of the GFC. Judging by a recent investor survey by Deloitte Access Economics for the ASX, it could be time for a refresher. i

Overall, 21 per cent of investors said they had little tolerance for risk but still expect annual returns of 10 per cent plus. Worryingly, less than half have diversified portfolios. But the real surprise was that older investors who lived through the GFC were less risk averse than younger investors who have no direct experience of a market crash.

Be aware of market cycles

Perhaps older investors have learned what goes down comes back up, albeit with some twists and turns along the way. Time in the market also makes investors aware that one year’s best performing asset class can be next year’s worst. The best way to avoid timing the market is to have a diversified portfolio and ride out the short-term volatility.

These lessons were borne out recently when Vanguard looked at the outcome for three investors with a diversified investment portfolio of 50 per cent shares and 50 per cent bonds when the GFC hit.ii When the market bottomed in March 2009 one sold the lot and switched to cash. One sold all their shares and put the money into bonds. And one stayed put in a balanced portfolio.

While each boom and bust cycle is slightly different, investors who understand the trade-off between risk and return, hold a diversified portfolio and stay the course are best placed to ride out market cycles for long-term success.

If you would like to discuss your investment strategy, give us a call.